The Texas Library Association has done it again! Glasses raised to a successful 2017 conference in San Antonio and many mischiefs and fine things afoot indeed!

Someone had to stay behind and man the desk and that person was me this time. Nevertheless, I enjoyed tweeting with my colleagues who did go, and hearing some of the wonderful things that they did. Most notably, here’s a tweet from a colleague quoting Carmen Agra Deedy: 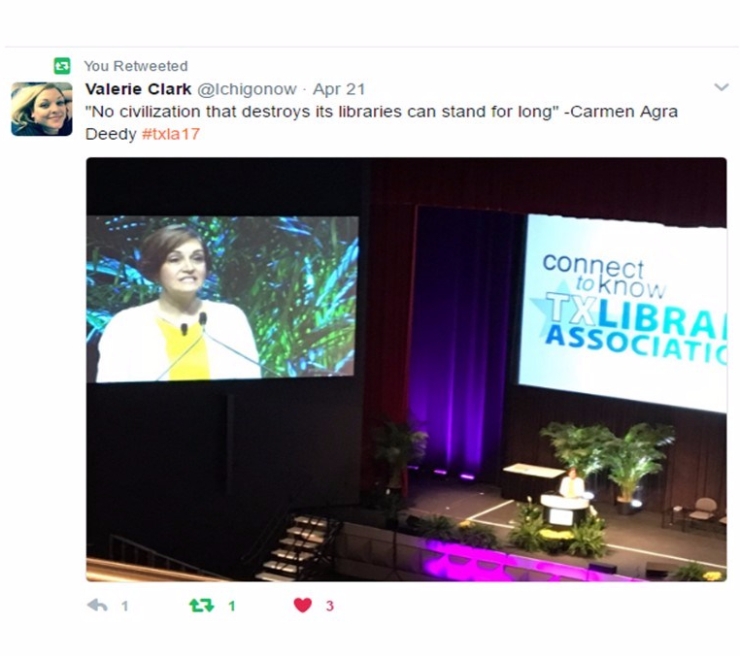 But also exciting times with Dan Gemeinhart present and signing books (He wrote Some Kind of Courage which I’ve blogged about here). And also Peter Reynolds was there and signing too (and he’s one of my favorite children’s book authors!). And these are just two of the many, many people there! Okay, so I may have been a bit jealous.

Never mind. I’m moving on with this blog post in which I’m doing a quick review of a number of children’s books that are just out. Some are from TLA and have been brought back by my fellow librarians, and some I have had the pleasure of seeing as they come in because I do the new book shelf at work and these were on it!

Here are ten children’s books hot off the press (or at least warm).

Look out for them, and enjoy!

Now this is a fun book, particularly if you are a grammar freak and if you are trying to teach children the value of grammar and the meaning behind it. Look for the funny pictures which tell the story and help with grammatical understanding. Basically, the story is about Verb who can do things and Noun who can be things. When Noun shows his other friends Interjection, Adjective and Adverb what he can be they are super impressed much to the sour feelings of Verb. However, when trouble ensues, Noun and Verb learn that living with each other is more useful than living without each other. This is a clever book and a bit of fun!

This is a sweet book about Mama and her son Tigey, who enter a car race. But it’s more than that. Look out for the beautiful message about valuing the world around you and about friendship. Mama shows an appreciation of the beautiful things in nature as she and Tigey race to the finish. They are helped along the way by some friendly pandas and overcome the cheeky exploits of the monkeys. In the end, they learn a valuable lesson about what friendship is and what it means. Look out for Bun Bun, she’s my favorite.

Why Am I Me? by Paige Britt

Just in time for El día de los niños/El día de los libros (Children’s Day/Book Day), commonly known as Día, this book is an interesting way to show differences among each other. The wording is very simple and the pictures superb. The ethnic and racial differences among all of the people shown in the book brings to light the idea that everyone is different and that that is A-OKAY! I’m going to give this a try in my Preschool story-time this week, (which is on diversity), and see how it works. It’s nice to see such a complex concept addressed effectively in written texts for children of this age.

A Novel in Verse by Tamera Will Wissinger

This is a great book in time for National Poetry Month. It’s an addendum to a similar book by the same author, entitled Gone Fishing, which you can also find a copy of here.

This book introduces poetry in its various forms through a single story (as noted, it’s a book in verse). The premise is that Lucy and Sam are going camping with their parents, who then become sick. Fear not, Grandpa steps in to save the day, and off they go. Various challenges make the story a funny one. Look for Tent Mates, I’m sure that you can relate. This is a clever way to introduce poetry to non-traditional audiences. It would be a great book for a book club and would make for a good discussion piece.

Oh! One of my favorite children’s authors, Peter Reynolds, strikes again! He brings us this simply lovely little number called Happy Dreamer. You’ll know Peter Reynolds from such champion reads as The Dot or Ish (incidentally, did you know that there is such as a thing as an International Dot Day? No, I’m not kidding, it’s based on the book and there’s more info on it here). Happy Dreamer inspires us to lose our minds completely in whatever way makes us…happy. It’s nice to see works that encourage creativity in all forms and Peter Reynolds is a master at encouraging this in children. Please read this little gem.

Javaka Steptoe brings us this story of artist Jean-Michel Basquiat, a Brooklyn raised child who is a genius of his craft. The story is vibrant in color and brings to us the inspiration behind Basquiat’s all-too-short artistic career. It explains Basquiat’s family life and his early beginnings. I read this with my daughter who is four and she easily picked up many of the concepts of this book. Take a look and then do a little research into Basquiat’s art and you will see how Steptoe has incorporated into the book the color which was so prevalent in Basquiat’s work.

This book was chosen for the Texas Topaz Non-fiction Reading List (which can be found here).

The Secret Subway by Shana Corey

Corey brings us the story of Alfred Ely Beach who patented a design for New York City’s first subway. Although nothing much came of his design, he is given the recognition of being one of many engineers who tried to solve the problem of overcrowded city streets in the 19th century. The story tells of Beach’s short success in operating a subway and also his demise. But most of all it gives children a brief history of how the subway came about and how Beach’s own design was re-discovered in the early 20th century and accredited with being forward thinking on his part.

This book was also placed onto the Texas Topaz list

Boat of Dreams by Rogério Coelho

I cannot even begin to describe the story in this book. It’s an interwoven tale of dreaming and dreamers. It is not clear whether the boy is dreaming or the man. Nor whether the creation is attributed to the boy or to the man. It doesn’t matter. Its illustrations are gorgeous. It’s a definite conversation starter and is well worth taking home to your children to view. I am absolutely sure that it is program-worthy and would love to incorporate it into an art or story-telling curriculum. There are no words (I mean literally, there are no words in the book). It is comparable to Eric Wiesner’s works (see Flotsam here), and is a beautifully crafted tale in this way.

Keep an eye open for this one and tell me what you think.

Well this book is adorable. It is written by Michael Dahl who also brings us Bedtime for Batman- see it here). The comparisons in the illustrations are great. We have Superman as we all know him; the all too muscular flying henchman, and then we have our junior super-hero with a lovely, loving family and a happy-go-lucky attitude. A nice book which I’ll no doubt bring out for an upcoming story-time on superheros that I’ve got planned.

Can a bird and a cat be friends? Well, the cat should be chasing the bird right? And the bird should be able to fly, right? This is a story of friendship between two unlikely allies. Max wants to eat Bird because cats do that, but instead they become friends who work together to get Bird up in the air. It’s a nice story about comrades and will be a good story-time tale.

There you have it. A quick blog on some new and up-coming books. Take a read of any that you find and enjoy them. There are some real beauties out there!